My Four Most Precious Guan Yin: the Fourth (Part One of Five: Mr Ang and the Thousand Hands Guan Yin)

Part One of Five: Mr Ang and the Thousand Hands Guan Yin

Mr Ang was not our new client. In fact he has been regularly buying our wealth enhancing items.

Like many of our faithful clients, after seeing results wearing our products, he came again and again for products that will enhance him even further. One of the items he did not miss out was the Heaven and Earth Wealth Garnering Ring.

In fact, he has also brought many of his family members and his friends to come see us and bought things from us.

He has got a very loud voice. We all remember him because of his behavior on his first visit to our gallery. His voice was so loud that it traveled to the mezzanine floor where I was at.

I asked my staffs who was speaking so loudly at the ground floor. My staff giggled at his uncouthness and said that he announce himself to everybody that he is a billionaire, not knowing that even the most wealthy have come to us.

And I told them that the fact he has an affinity to enter into our gallery has shown that he must have accumulated merits in his karma and for this we shall just respect him appropriately.

Some people have asked me the philosophical question before, if doing feng shui interfere with the cosmic karma of cause and effect.

But since the good feng shui is still not something that they have accumulated the merits themselves, there must still be someone to pay the price for it.

The red vermillion that Lotus on Water uses to do the ceremonious blessing is a symbol of the innocence and precious price paid on behalf of the receiver and administrator of the good feng shui energy.

There was a year I did feng shui for a very big temple in China (land area of slightly more than a hundred hectare). I changed the whole initial plan altogether to borrow the dragon qi of the mountain range. And I forgot to bring my own red vermillion to sprinkle onto the mountain ground.

The result of my own carelessness? My tears rolled down from my eyes every time I opened my mouth to speak. It's some parts of my soul thinning into the air. I had to cut my finger to let blood drip into the red vermillion and splash it onto the ground and asked the deity of earth here to send over to the deity of the mountain there, to pay the price of stealing the cosmic karma effect to give to the temple and believers of that area. It took two weeks before I began to recover.

So while many think it's fun to be a feng shui master, ordering people to adjust the design at his command, few understand the responsibilities to be involved.

For that reason I am very particular about the red vermillion we use. I allow no one except myself to prepare it. And I leaked no final secret to anyone lest the price of the blood is upon me.

The dramatic first encounter with Mr Ang did make a memorable impression not expecting an even greater drama to follow. And it has got to do with our sandalwood Thousand Hands Guan Yin.

A Thousand Hands Guan Yin is supposedly the most powerful manifestation of Guan Yin image.

But what is so special of this Thousand Hands Guan Yin is not only about her shape but also the material it's made of. 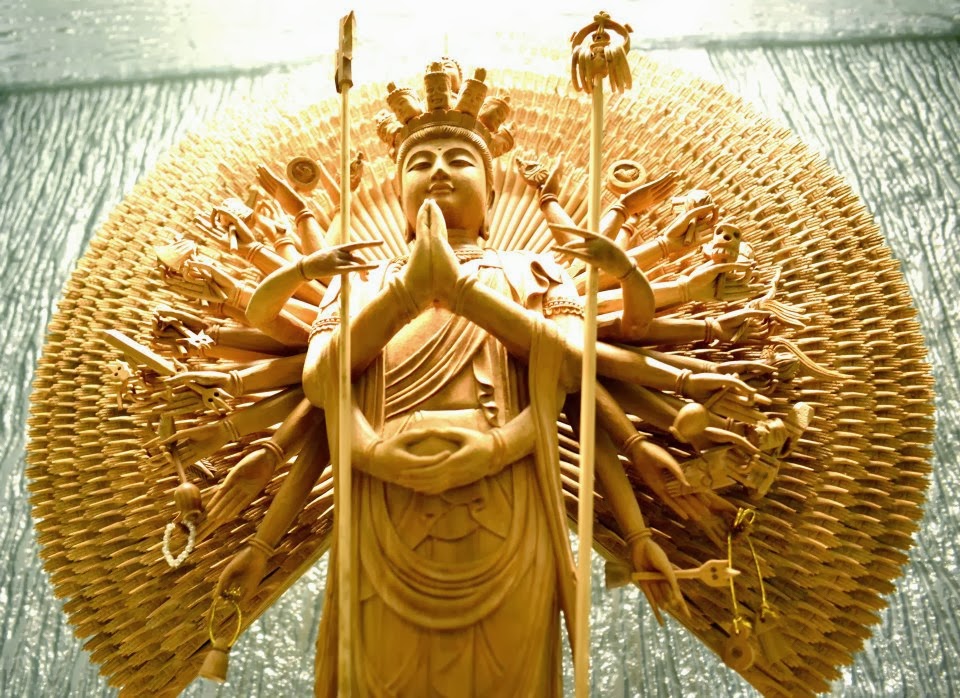 The sandalwood that is used to make the Guan Yin comes from the southwest coast of India where the land is sandy and rocky, making the wood slow to grow but grown with exceptionally high amount of oil in the bark.

When the trees are germinated, they have got to be parasite on a peculiar plant which that part of the world has plenty of. The plant has flowers that is poisonously stench, but would keep wild animals away and would induce the secretion of the oil in the sandalwood as it grows.

The trees are harvested when they are above eighty years old. They will need to be stored to allow the oil in the trees to ferment with the oxygen in the air. Another twenty years are gone. Like grape juice turning into cognac, the sharp scent of the wood would be transformed into sweet fragrance.

The wood is carved now. Cares have to be taken. If you carve at the wrong side, there will be cracks in the future. Most people would varnish a layer of lacquer or wax to prevent future cracks. But not for Lotus on Water. If you do that, you would be sealing up the fragrance of the sandalwood and also preventing the wood from breathing in air to continue the post carving fermentation process. That is why all Lotus on Water sandalwood come without varnish. They may not look as shiny as those who are, but their power is organic. They organically live forever, continuing the fermentation process, while enhancing the energy of your house after you buy them and place them in your house.

The Thousand Hands Guan Yin has brought us a lot of business once it was placed in our gallery. Some even commented that they noticed that out of all the shops in the same row, our  gallery was the only one that attracted a lot of clients.

Thus, when Mr Ang came to ask me to sell him the sandalwood Guan Yin, I refused. So he retorted by asking me why did I fixed a price tag on it if it's not for sale?

I always believe in honoring the promise I make to people as well as to deities and Gods. I told him I have an identical Guan Yin in my house. And if he really want to buy my sandalwood Guan Yin, I shall let him have that one.

Mr Ang went on saying that he is a fervent believer in Guan Yin and he would like me to go to his office to see where is the best place to locate the Guan Yin. I felt a bit guilty for not removing the price tags soon enough, and thus has indirectly promised clients of the sales but then I refused , I agreed and he drove me to his office which is a huge factories.

He told me that his wish is for his companies get public listed. And he asked if the Guan Yin is able to help him  do that.  I told him that as long as he locate his company at this premise, it will never be possible. Then he told me he had a new factory, still under construction else where. He asked me to check if that place can help him fulfill his dream. And I told him yes.

He called his agent straight away to sell off his factory so that he can use the money he earn to construct his new factory. But he was not pleased that the agent told him that the market is slow, there is hardly any buyers and the factory worth only 15 million Singapore dollars.

Then I notice that he was not wearing the agarwood wood beads he bought from us that have granted him the wish of his life. He was wearing a fake agarwood beads. And I told him straightaway in his car.

I said, Mr Ang, can't you tell it's fake. How can you believe that something that look like this and smell like this would be real since you have bought the real one from us before.

Suddenly the image of the rich Ms Moon appear in my mind. Of which I will talk about in further length later.

Anyway I comforted Mr Ang that the factory will be sold within six months and at a price much higher than the market price after he placed his sandalwood Thousand Hands Guan Yin where I told him he should place.

Little did I expect that he made use of my comforting words  and my prediction to delay payment. He told my staff, your master "promised" me that my factory would be sold off within six months. If he is right, he should let me pay a deposit and let me pay you back the rest once I get the money from the sales.

Of course I believe what I say. And I am always careful not to give empty promises. Sometimes I assume everyone to be like me, without suspecting. And I allowed him to pay us a deposit and let him take a sandalwood Thousand Hands Guan Yin away and place it in his factory.

Six months later, Mr Ang came back our gallery. He told me his factory was not sold and he did not want the Guan Yin anymore. I told him, we do not accept goods that was brought back by clients because we never sell second hand goods to clients.

Mr Ang replied he doesn't care if I burn the Guan Yin away. He did not want the Guan Yin anymore because he did not want to pay me anymore money. I was furious when I heard his words. How can a decent human being be so ungrateful  to the grace shown by others. How can a person touched by grace be having no fear and respect towards Gods. I told him to leave my gallery straightaway as I do not want to see him anymore.

He left my gallery shocked by what I said to him. At the door, he told one of my staffs how dare I treat him in such manner, don't I know who he is and what he did in the past?

After he left, Mr Kan, my director of Lotus on Water took out his computer and checked on the internet. Mr Ang's factory was indeed sold. He was lying to us that it was not sold. He sold it for 20 over millions, 5 millions higher than the market price. Straight away after the sale of his own factory, he booked two luxurious cars.

The irony is, he did not leave the factory which I told him to. He rented it from the new owner and continued his operations there.

Events that happened in the next few months brought us into a lawsuit with him. Mr Kan suggested going ahead with the lawsuit against him.

After thinking a while, I agreed and granted Mr Kan the permission to do so. We ought to show mercy and grace to people. But we shall never bow our knees to any one who threaten us with terror or lawsuits. At times we need to be a warrior of the light.

And if this is the time to do so, so we shall.

(Part Two to be continued next week, same time.)
Posted by Kan Ying Loong at 6:38 PM