Walking the learning path with your Lotus treasures

We work on things that we want to better at.  The golden nugget in Learning from repeated attempts is to do it better the next time.

When you repeat the same activity again, you are more prepared because you learn from your past interactions.  Just like a baby learning to walk, just like how I pick up English for the first time.  I work on it until I can speak English fluently now.  We tend to forget how we put in so much effort to master grammar, verbs, adjectives and nouns.  We struggle up a slope, rest on a plateau, and struggle up another slope.  This is the natural progression to Success, and it is all in our own masteries.

My Lotus Fiji sandalwood beads, combined with my Lotus jadeite pendant that also contained my literati element, readily introduced novel perspectives or helped me to recollect my past victories quicker and clearer.  This contributed greatly in reducing my learning curves and hastening my mastering of subjects.

My Lotus treasures presented assisting steps up my learning slope which  I prefer to walk the learning path with Lotus on Water, and so can you.
-- Leonard
Posted by Leonard at 9:59 PM No comments:

Delivering your dreams to you

Many of you had wants in mind.  Some people have a blurry vision of what they want, some very clear.

At the writer's club last week, a fellow writer's experience brought me to think about how could Lotus treasures bring your dreams to reality.

Jasmine wanted a job.  She walked into the Lotus gallery and bought a Lotus auspicious jadiete and upon stepping out, she received a phone call offering her a position.

Many of us would perceive it in this manner.  But what is going on behind the curtains?  What made all the dots aligned that resulted like a smooth process.

The reality is that she was already thinking repeatedly with strong desire in her mind that she set on, was a job.  She put in all means to get a job by doing all the actions needed, by sending out CVs, going for interviews and clarifying and refining her vision of what she will work as in her mind.

She also contemplated many many times over, considering from all angles, that Lotus treasures, despite the price, will deliver her vision.

She exchanged her efforts in the form of Money for the Lotus jadiete.  Blessed by Master Yun to customized specifically for her and her purpose, then wear it.

She had a strong want in mind, wears the Lotus treasure, her chi improves tremendously that the want materialized.  She did it.  This time, it's your turn.

How my Lotus treasures keep me in career safety

A recent article by my fellow writers club at Lotus reminded me of how my Lotus treasures managed to keep me safe in my career.

A few years ago, I applied for a position at bank.  It was a prestigious bank that I had also would like to be part of.  On the actual day of interview, I was brought to a different level that showed me the beautiful scenery of the sea.  I thought to myself, it was going to be smooth sailing like to lush blue sea on the horizon.

As I thought that this interview should be routine for the interviewer, I tried to make it more interesting by touching on the Greek election.  This is both a hot topic at that time that may have rampant repercussions to the rest of Europe and the world, as well as affecting the bank’s possible exposure to unwanted risks.  I treated this like a conversation piece and also as a means to convey to the interviewer my thought process and if this manner of thinking would add value to his department.

After an hour of interview, I left the glass building and waited for a reply.  I did not receive any reply informing me whether I had passed the my interview, even after 1 week of waiting.  I guess that this was normal for unsuccessful applicants.  I called up my HR consultant and realized that I was not offered this position.

1 month later, as I scrolled through Google to I read on some news, I saw the bank going through an episode that severely needed improvements in certain area of its operations.  This resulted in some monetary losses.  And the department that I was declined for potentially could be affected by this.

I thank my Lotus treasures for avoiding this even though on the surface of reality, it seems like a rejection, it was a blessing.  I was still back at my job, with an increased gratitude that I was wearing my Lotus treasures.
-- Leonard
Posted by Leonard at 9:49 PM No comments:

Posted by shaunchoh at 12:26 AM No comments: 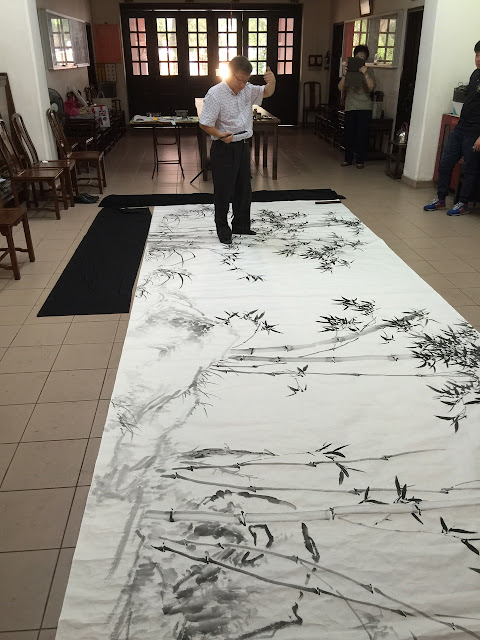 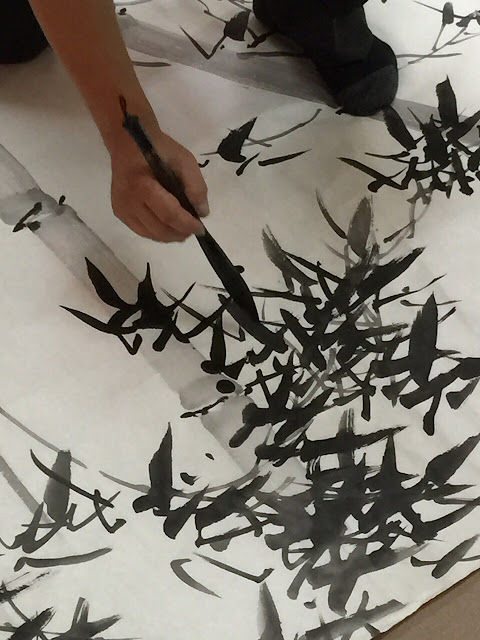 This masterpiece named Forest of Bamboo and Orchid with a Brook Flowing Through (脩竹丛兰静观其趣，和风朗日足畅斯怀) is commissioned by Master Yun Long Zi and created by Singapore’s well-known artist, Mr Nai Swee Leng (赖瑞龙老师). It has a length of 566cm and breath of 206cm; this dimension is traditionally called zhangba (丈八) in Chinese art.

The paper used in this art piece is by no means a simple piece of paper, it is manufactured using traditional methods by Hong Xing Xuan Paper (红星牌手工宣纸) in the year 2003. This 12-year-old paper is provided by Master Yun.

The creation of Forest of Bamboo and Orchid with a Brook Flowing Through took three weeks, beginning on the 4th of June 2015 and completed on 18th of June in the same year.

The two plants, orchid and bamboo, play an important role in the Literati Painting style of Chinese painting.

Both the orchid and bamboo can withstand the extreme cold of winter and does not waver under the weight of snow and frost.

A poem describes this, “With the exception of orchids and bamboos of the mountains, that can endure spring and summer then autumn and winter again.” (唯有山中兰与竹，经冬历夏又秋冬。)

Bamboo, orchid, plum and chrysanthemum, are known as the “four gentlemen” in Literati Painting.

Bamboos have hollow trunks, and this has a connotation of humility and modesty in Chinese culture. It reminds us that the more knowledgeable we are, the more humble we need to be, in order to achieve further progress.

The masterpiece, Forest of Bamboo and Orchid with a Brook Flowing Through, is conceptualised and painted by Mr Nai Swee Leng.

Mr Nai Swee Leng is born in Singapore in the year of 1946; hence he is 69 this year. At the age of 16, Mr Nai started learning Chinese brushworks from his teacher, Mr Fan Chang Qian.

Mr Fan, who is one of the Singapore’s pioneering artists, was educated in Shanghai and is a renowned Wu-style artist. He started his art education at a young age and it was during this time when he started learning the Shanghai School’s style of painting.

Forest of Bamboo and Orchid with a Brook Flowing Through’s main style belongs to the Shanghai School style of painting.

Mr Nai Swee Leng is well known for his painting of orchids and bamboos.

A flowing brook in the centre separates this artwork, to its left you are presented with a foreground view and to its right, a background view. The bamboo forest on the left of the brook appears to be very close to the viewer, it seems to be right in front of your eyes and the dense forest cover hides everything beneath it. As your line of sight moves right, you see the brook again, and just to its right, you see another bamboo forest in the background, it seems to be in a distance. Looking further right, you get a view of the middle ground.

It is challenging to have a panoramic view of a wide painting, hence you have to shift your perspective from the left to right, while the line of sight moves from the foreground to the background, before moving back. This change in perspective relaxes the eye muscles, while the flowing brook and the images in the background opens up your mind. The boundless sky in the centre enhances this relaxation and sense of openness, allowing the mind and body to attain peace and comfort.

Without orchids and its leaves being juxtaposed above the brook, this artwork will be split into two short paintings. The orchids thus functions as a bridge, conjoining the two seemingly separate paintings into one, and also bridging the background and foreground.

However, the undulating land beneath the orchids will appear dead if not for the presence of the flowing brook. The artist’s ingenuity in adding a flowing brook into the artwork, appears to have added an “air vent” in the composition and this in turn adds life to the otherwise boring undulating land.

Moreover, the “air vent” faces and flows towards the viewer, guiding the viewer’s line of view from objects in the foreground to images in the background, before coming back to the foreground again.

This is not a dead piece of artwork, but a flowing one. The bamboo forests at the background, middle ground and foreground, the orchid leaves, bridges and the air vent of the flowing brook, works together in guiding the viewer's line of sight around the painting, from the left to the right, from the deep to the shallow and from the far to the near, it sets you thinking and enticing you to come back for more.

The brook isn't long, measuring slightly over one foot, but it is the soul of the painting and it has the effect of "drawing the eye on the dragon" (画龙点睛).

This masterpiece is Mr Nai’s largest painting project to date. It was forecasted to be completed in three hours, but instead, it took three separate sessions of three hours, with one session a week, to complete.

This is due to the huge scale of the painting, which is taxing on the mind and body.

The first session saw the painting of bamboo branches, leaves, ground, orchids and the brook.

The second session saw the inclusion of bamboo leaves, which enhanced depth and richness of the bamboo forest. Orchids were also added above the flowing brook. The ground was also coloured in ochre ink to augment the tranquil and grace of the sky, bamboos and orchids.

The third session had the inscription added and multiple seals impressed upon the artwork to signify its completion. The inscription reads, “Forest of Bamboo and Orchid with a Brook Flowing Through. Yi Wei Year, Scorching Summer. Swee Leng’s Hardwork” (脩竹叢蘭静觀其趣、和風朗日足暢斯懷。岁次乙未，炎夏。瑞龍挥汗。).

There are two name seals (名印) below the inscriptions, the top one reads, “Gui Hu Nai Shi” (歸湖赖氏) and the bottom one reads, “Swee Leng” (瑞龍). There is another seal (闲章) above the inscriptions; it has “Zhi Zai Qian Li (having high aspirations)” (志在千里) carved on it.

At the right corner of the artwork, there are two more seals impressed there. The first reads, “Xian Yun Ye He (free and unrestrained)” (闲雲野鶴) and the other reads, “An artwork created after ascending Mount Lu, walking on the Great Wall of China and visiting the Forest of Stone Tablets” (登廬山，走長城，访碑林，歸来所作).
Posted by shaunchoh at 10:57 AM No comments: