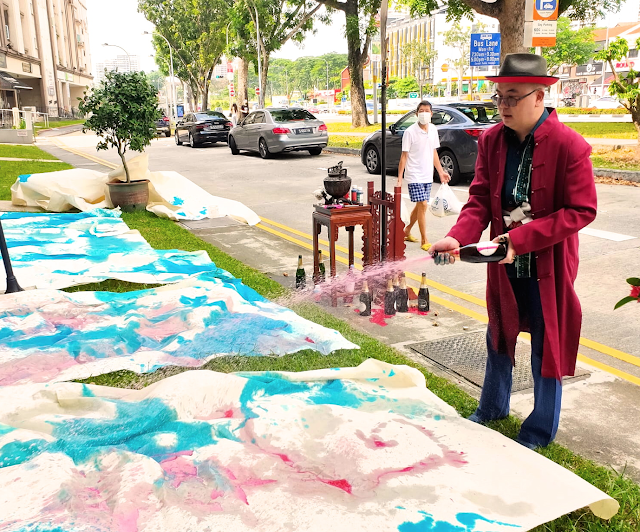 Yes, even fengshui can be an art.

That is, after Master Yun listened to his inspirations, endeavored despite “common” business sense, and led well ahead of fengshui or art experts, for years. 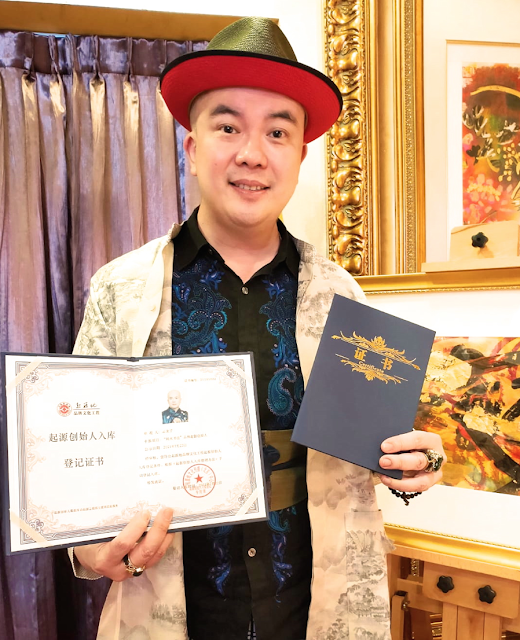 And since they are art, they are, firstly, beautiful.
(Seems like a redundant statement to make, but trust me, there is “art” nowadays that’s downright ugly...some, on purpose, some, unintentionally so.)

The beauty of Master Yun’s art appeal to the senses of the people, even to the many who are uninitiated. Probably that’s why, many who have collected Master Yun’s fengshui art, that’s their first painting or calligraphy they have ever invested in. 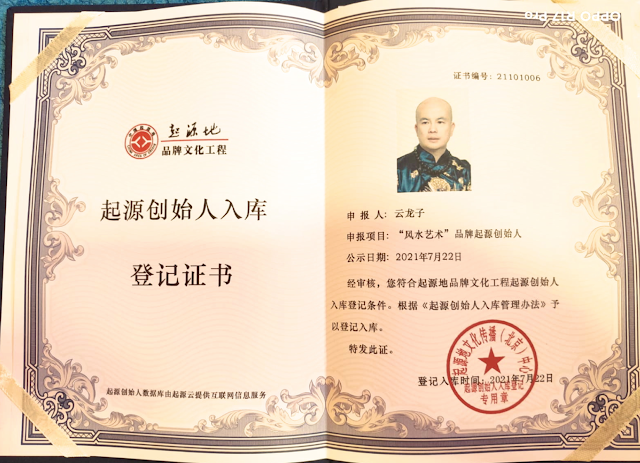 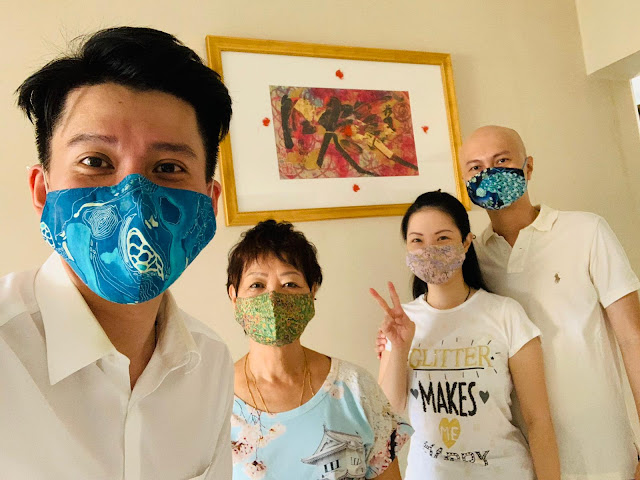 As one of my Hong Kong client who is also an art connoisseur (he has super VIP access to all prestigious art fairs in Hong Kong, and the top art galleries all know him by name...that kind of level) said: he can feel the energy from Master Yun’s fengshui art.

One can really say: Master Yun’s fengshui art speaks to our souls. 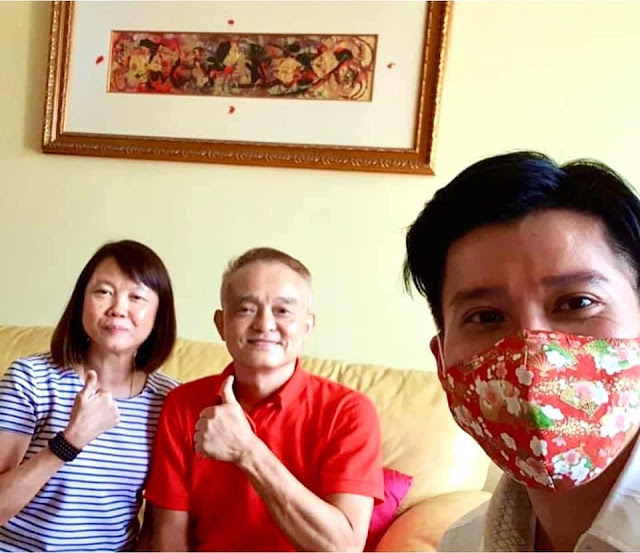 And for a piece of art to be beautiful and soulful, it has to be (at least) original and authentic. Not just any clichés (no offense to the overused “9 horses” or “8 kois” imagery...they are just different), not just any prints or soulless imitations, not just something that can be bought from Taobao and resold to Singaporeans under the guise of flowery marketing... 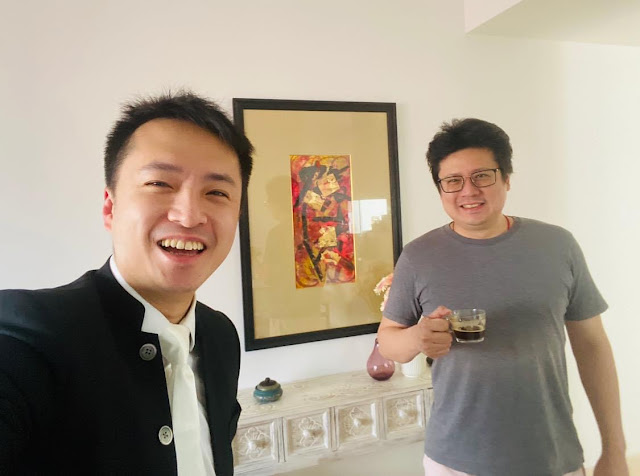 I am sure Singaporeans are wise enough.

I am sure art collectors, all around the world, are tasteful enough.

And I suppose that’s why, Master Yun’s fengshui art are sold at a record breaking momentum, and collectors proudly displaying them.

(to be continued...depending on my time)

Have you ever wondered how many awards and recognitions Master Yun and Lotus on Water Fengshui Gallery have received?

Master Yun and Lotus on Water have received numerous awards, that I almost lost count of the exact number of awards received!

Other than Master Yun and Lotus on Water Fengshui Gallery, which other masters and fengshui galleries have such Great Achievements?

The answer is NONE!

Yes! None other than Master Yun! Master Yun is the only one in Singapore and probably in the whole world!

Lotus on Water, the BEST FENGSHUI GALLERY was founded by sixth-generation Fengshui Master Yun Long Zi, and has been inspiring wellness and wealth since 2006.

Lotus on Water was awarded Golden Brand Award in 2007, Singapore Prestige Award in 2008 and Successful Entrepreneur Award in 2010.
Lotus on Water jadeite is also the only in Asia selected to be featured on International Gem Society's "Jade Buying Guide". 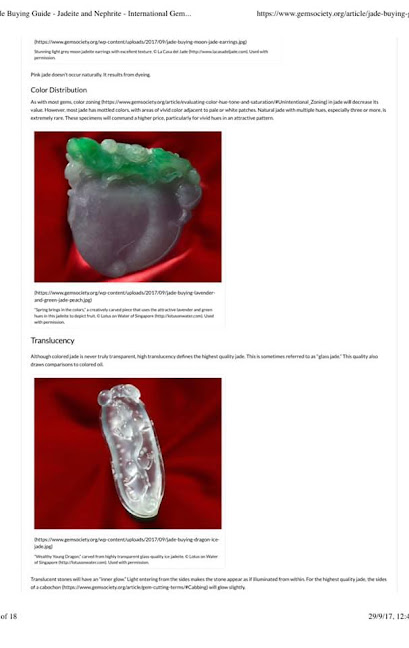 All these years, we continue to see how much Lotus on Water has grown from Master Yun's involvement in various areas. The awards and recognitions of Master Yun goes on and on.

And now...Master Yun and Lotus On Water is not only well-known in Singapore but also INTERNATIONALLY!

Master Yun has been receiving MANY awards and recognitions from China, America, Korea and Japan.

8. 70th Anniversary of the Founding of the People's Republic of China People of Unusual Dedication
建国70周年·特殊奉献人物 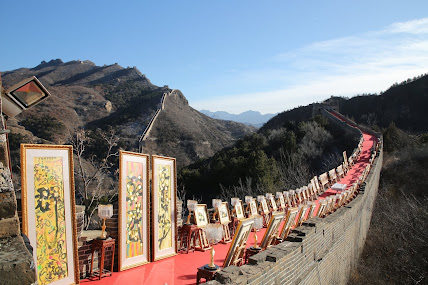 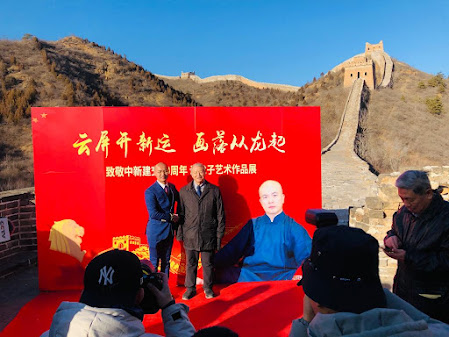 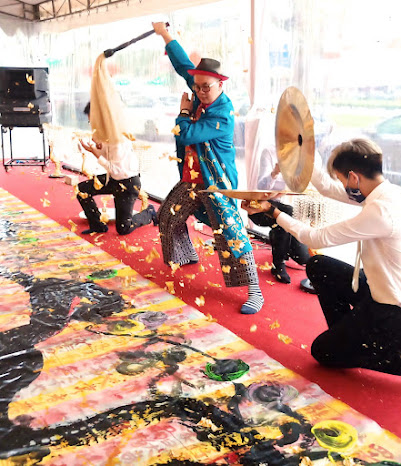 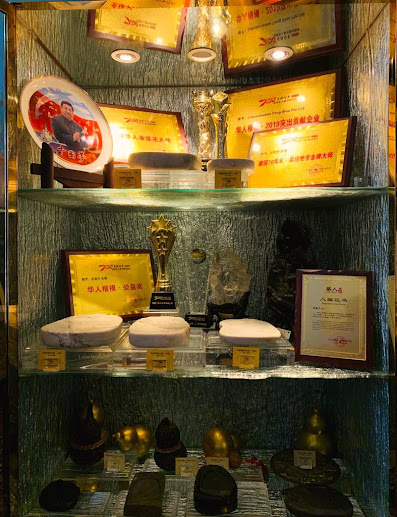 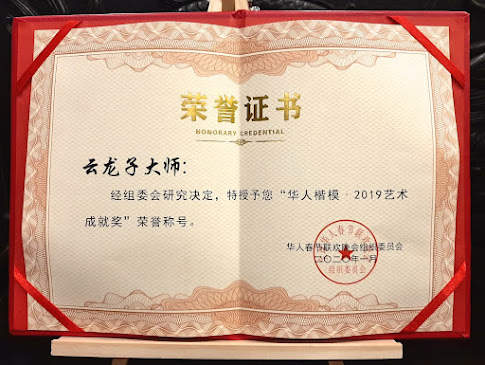 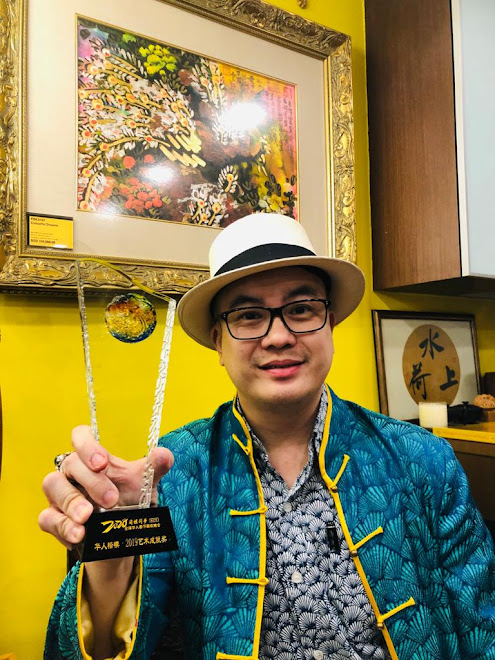 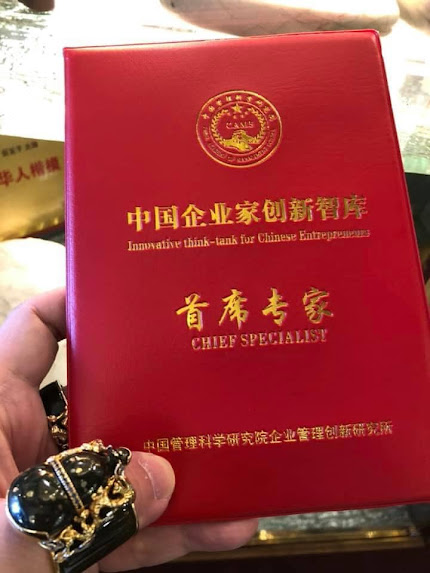 In July this year, Master Yun received another award from China. It is the “Lei Feng” Emulatable Personality in Service and Contribution”《学雷峰自愿服务榜样人物》.
https://www.facebook.com/masteryun.art.5/posts/281506050397714

The Founder, meaning the Founder of The Source. And so Master Yun is the Founding Father. In Chinese, it means "起源创始人".
When clients are investing in their future and fortune with Lotus On Water, they are acquiring their blessings directly from the source, full of spirit, full of soul, full of potential. What we are enjoying, prospering from, now, stem from Master Yun’s creations.
The end is never the same as the source. The imitators will never be as close as the founder.

The Certificate of Honour from Korea was received by Master Yun in April this year as Master Yun was invited to take part in the 2020 International Art Festival.
https://www.facebook.com/masteryun.art.5/posts/210128204202166 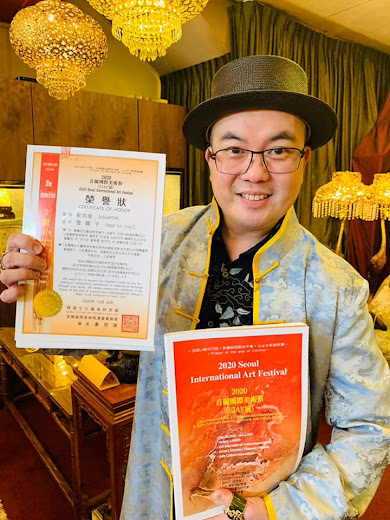 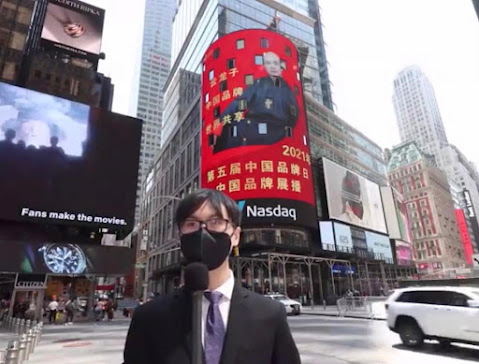 From Great Wall of China, to the exhibition and recognition by Korea’s art experts, to New York’s Nasdaq big screen, to the honour by the Japan Imperial Family. 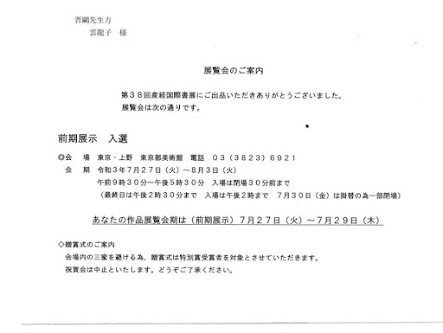 These two years, Master Yun stayed in Singapore because of the Pandemic. However, Master Yun's art and fame travelled like they have never before. China, America , Japan, Korea, and Singapore and is going to be many more countries! 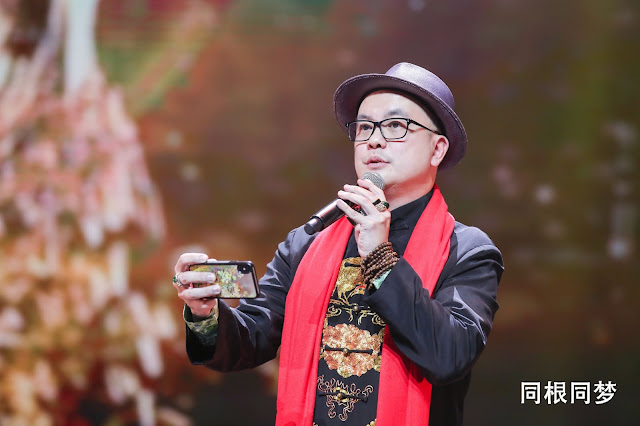 Master Yun, FOUNDING FATHER of fengshui jewelry.
Now, we are all familiar with fengshui jewelry. Intimately so, for sure, since you are wearing your Lotus collections, beautifully, proudly, prosperously. 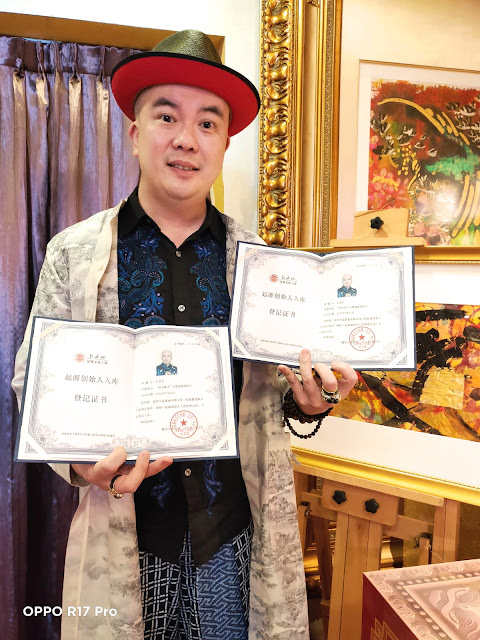 The concept of wearing something to improve one's luck, I think it definitely has been around for a while. But it was really Master Yun who insisted on it, persisted on the high standards, defined what can wear and what cannot wear...and coined the term "fengshui jewelry".
Jewelry that is tasteful, elegant, and can improve your fengshui. 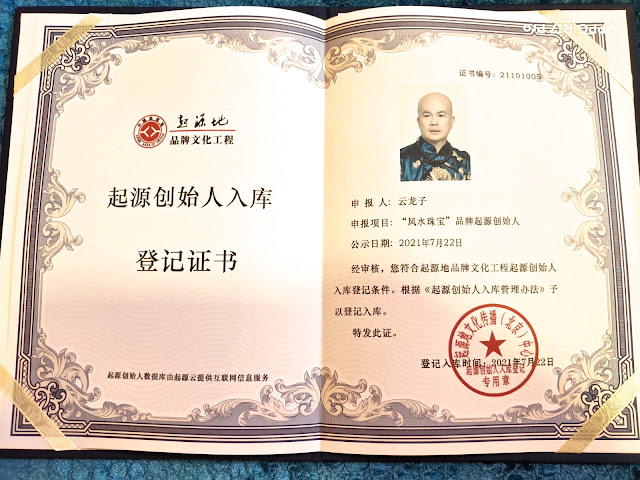 Long, long ago, in one of our earliest blog articles, Master Yun has already made this clear, the direction of Lotus on Water:

Who and What is Lotus on Water?
Yes. Lotus on Water is a glorious Feng Shui revolution.
She is more concern with the prescription of Feng Shui than the diagnosis of it. In other words, she presents you the cure and not the inspection, the medicine and not the physician, the solutions on how to let Feng Shui bring your dream to reality than to tell you what you are destined.
In short, the reward and not the decree.
-- Master Yun Long Zi, 27 October 2013.
(https://bit.ly/3iJyXZe)

And even clearer over here, on what can be considered as an up-to-standard Lotus on Water fengshui jewelry:

Master Yun: Lotus on Water Sells Nothing, But These
The treasures sold in our galleries—jadeite, agarwood, sandalwood, Duan Xi inkstone, crystal Buddha statues—have been used for a long time in human history. This is why 90% of the treasures we sell can be found in auction houses.
Humans are fickle and our interest does not last long. We can be into something today and go crazy over another tomorrow. But there are a small number of things that stand the test of time, maintaining and proving its value.
And Lotus on Water sells nothing, but these.
— Master Yun Long Zi, 31st August 2016
(https://bit.ly/2Xqlm0X)

AND, what's more, the Lotus fengshui jewelries are created by Master Yun himself. 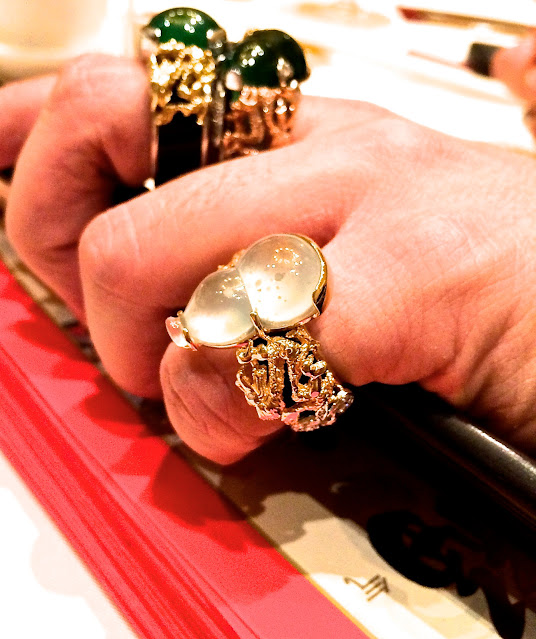 You have already seen how creative Master Yun is with his fengshui paintings and calligraphies. Let us remember, Master Yun's creations in the realm of fengshui art, also manifest through fengshui jewelry. 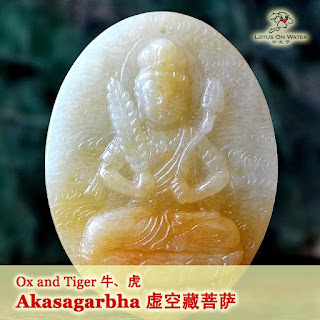 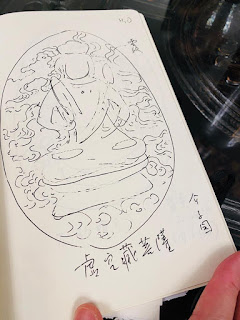 Take our jadeite Zodiac Guardian Buddha series for instance. Though we just released this series in 2020, Master Yun actually already drafted/sketched them way back in 2015. 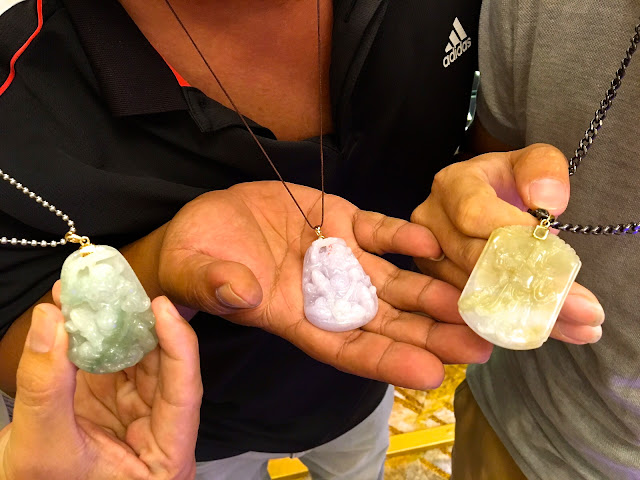 Also the top favorite Lotus jadeite Zhong Kui 钟馗, which so many clients have been buying since the gallery was founded. I still remember how I remarked to Master Yun in 2006, that how would anyone buy such a fierce-looking (like, 面目狰狞) design...guess what? 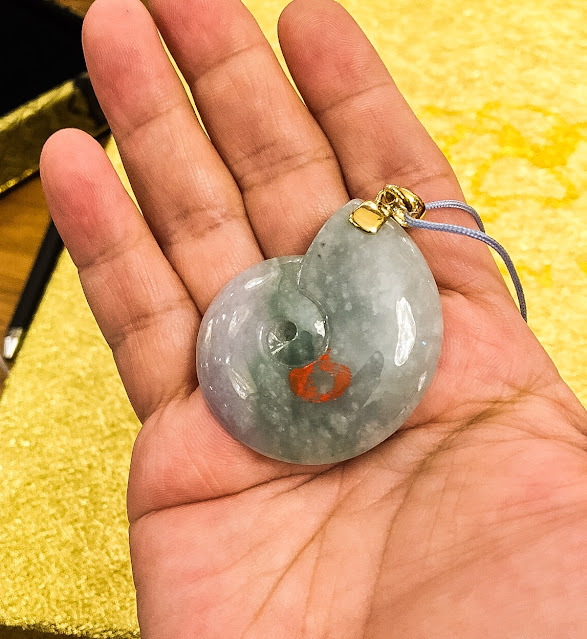 And also the Lotus jadeite ammonite 玉彩螺. When the gallery first started, a client brought over a fossil ammonite and asked if we sell something like that. I said, we only sell fengshui jewelries carved of jade. To which this client said: oh, I will definitely buy one if you carve a jadeite ammonite. And Master Yun went ahead to design and had them carved. Guess what, she didn't come back to buy. But the jadeite ammonite became one of our hottest collections, even till today.
Each line of fengshui jewelry has its origin story, which fuels the souls of the Lotus collections. Which is probably also why, it just feels different wearing Lotus fengshui jewelry. The unexplainable sense of wholesomeness, fulfillment, happiness...I am sure you can feel the soul and spirit of your Lotus collections.
As if they are alive. 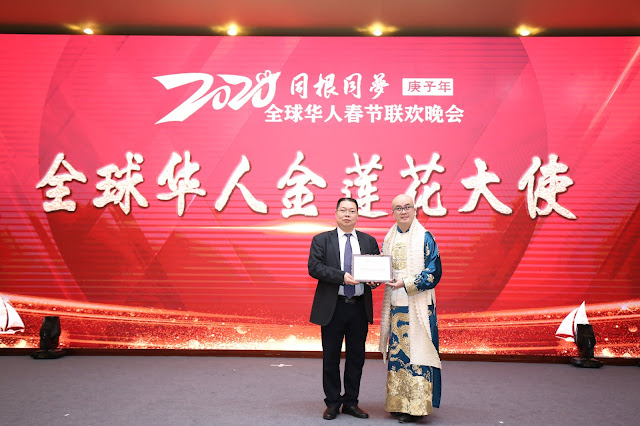 It is free-of-charge to make ridiculous and laughable claims in today’s world. And there’s endless people doing that, claiming that they come from a lineage of fengshui masters (with no proof whatsoever), claiming that they came up with this or that design (which is blatantly a copy, and worse, a lousy and ugly imitation)...but I suppose sensible people can see and feel the difference.
The difference between soulless imitations that can’t even catch up with our dust, and authentic pieces from the FOUNDING FATHER of fengshui jewelry.
Proud to be the source.
-- Kan, Executive Director
Posted by Kan Ying Loong at 11:19 AM No comments:

Reflecting back, it was few months back since Lotus on Water celebrated its 15th Anniversary on 25th June this year.
Since joining Lotus on Water in 2019, which is 2 years back, it was the most memorable Lotus event that I have attended thus far.
Why is it so ? Firstly we are in COVID 19 pandemic which has many restrictions imposed in everyday aspect of our life. Safe distancing, event restrictions etc. Secondly, it was my first time participating in the event with the honor of participating as a Lotus follower.
During the preparation day, a day before the actual day itself, we found ourselves in a dilemma as we were informed of a new restriction for the event and the whole event could end up losing a lot of vibrancy as a key event which is the blessing of the paintings is in the danger of being removed. It would have made our rehearsals and preparation works futile.
Facing with this challenge and with hours counting down to the actual day, the Lotus team sit down together and brainstorm for remedy to the situation; feeling anxious and lost.
Everyone was thinking hard and suddenly, Master Yun had an idea. Why not do it at his home where there is a residents' private area, which has good fengshui facing the Marina Bay, where all the global financial institutions are located, and not forgetting with the surrounding waters to absorb "huat qi" or "wealth luck" to do the blessing of the paintings?
It was agreed unanimously among all, and history was made. It was a spectacular show, setting higher standards for years to come.
Me sharing with buddy Ian on our experiences for the Lotus anniversary:
https://www.youtube.com/watch?v=mz5Vguf1XtQ&t=152s
The blessing ceremony that took place at Marina Bay Sands and Marina Bay Residences:
https://www.youtube.com/watch?v=c1zHLzm7pR4 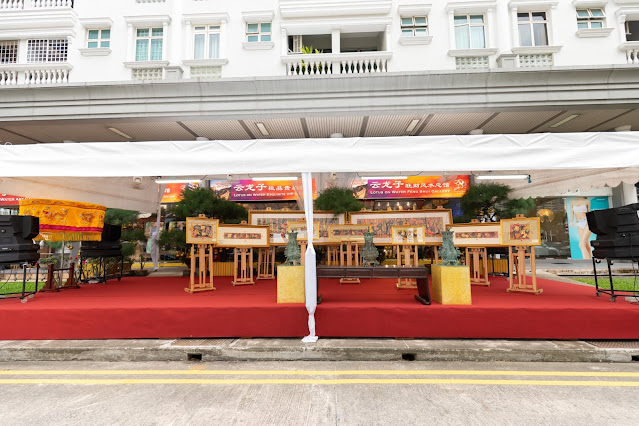 Wishing you the best of luck, huat on!

Email ThisBlogThis!Share to TwitterShare to FacebookShare to Pinterest
Labels: anniversary, Lotus on Water, the lotus story

Fast forward 1 year later after wearing my agarwood, I noticed not only in wealth improvement but also good health.

Recently, I just got fully vaccinated but was spared of any side effects which affected many people who took up the vaccine like headache or fever, in fact no side effects at all for the 2 doses taken.

I believed that it could be after a year of wearing agarwood, my health has prospered thus relieving me of any health hazards or illnesses and the recent episode of taking the COVID 19 vaccine from Pfizer has proven that.

Last but not least, I thought it was very kind and patriotic of Lotus on Water to sponsor clients when they take up the SINOVAC COVID 19 vaccine option.

Last but not least, Happy National Day everyone! 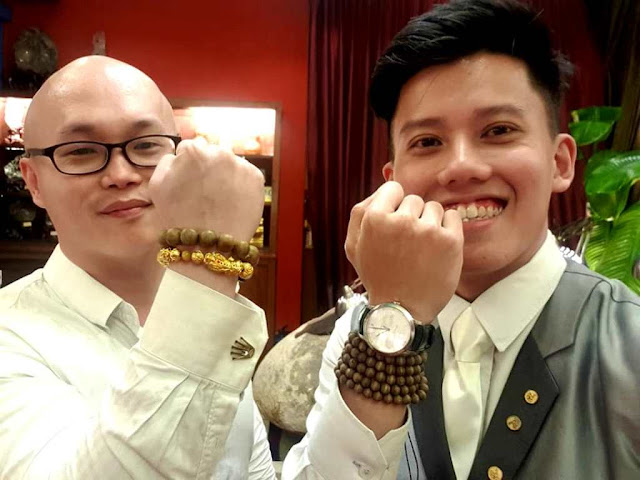 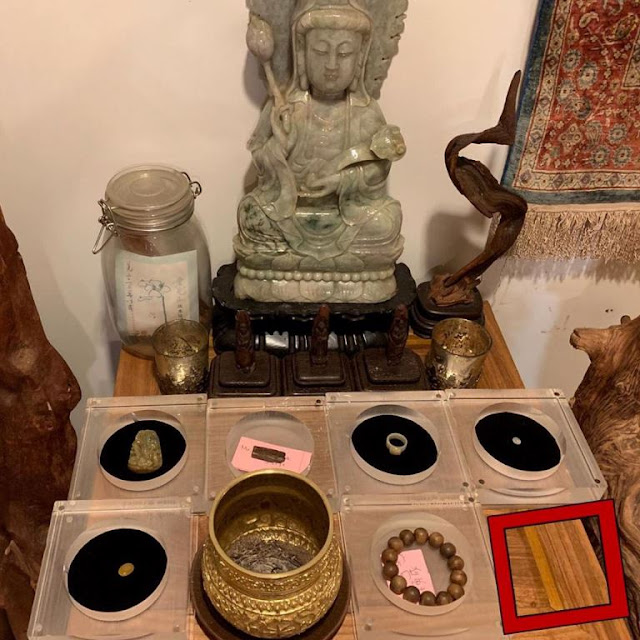