Why No Feng Shui Convention This Year?

I cared very little to explain to most of them. However some are very sincere, and so I explain the decision we have after long consideration.

We have clients who went to the convention to listen to methods to help enhance different kinds of luck they want. Somewhen in the year, some of them came to ask: I followed everything your Master Yun told me. Why is it the luck I wanted is not happening? I checked through the records and found he bought nothing. So I asked him: how can you say you follow everything while you bought nothing? So he confessed he bought the feng shui items somewhere else.

So I suggested to Master Yun not to give any feng shui convention this year so as not to give the idea that it is seeing the doctor and not taking the right medication that cures them.

We would only reveal the heavenly secrets to deserving and sincere clients.

And for the deserving and sincere clients, here are the collections for your prosperity this year: 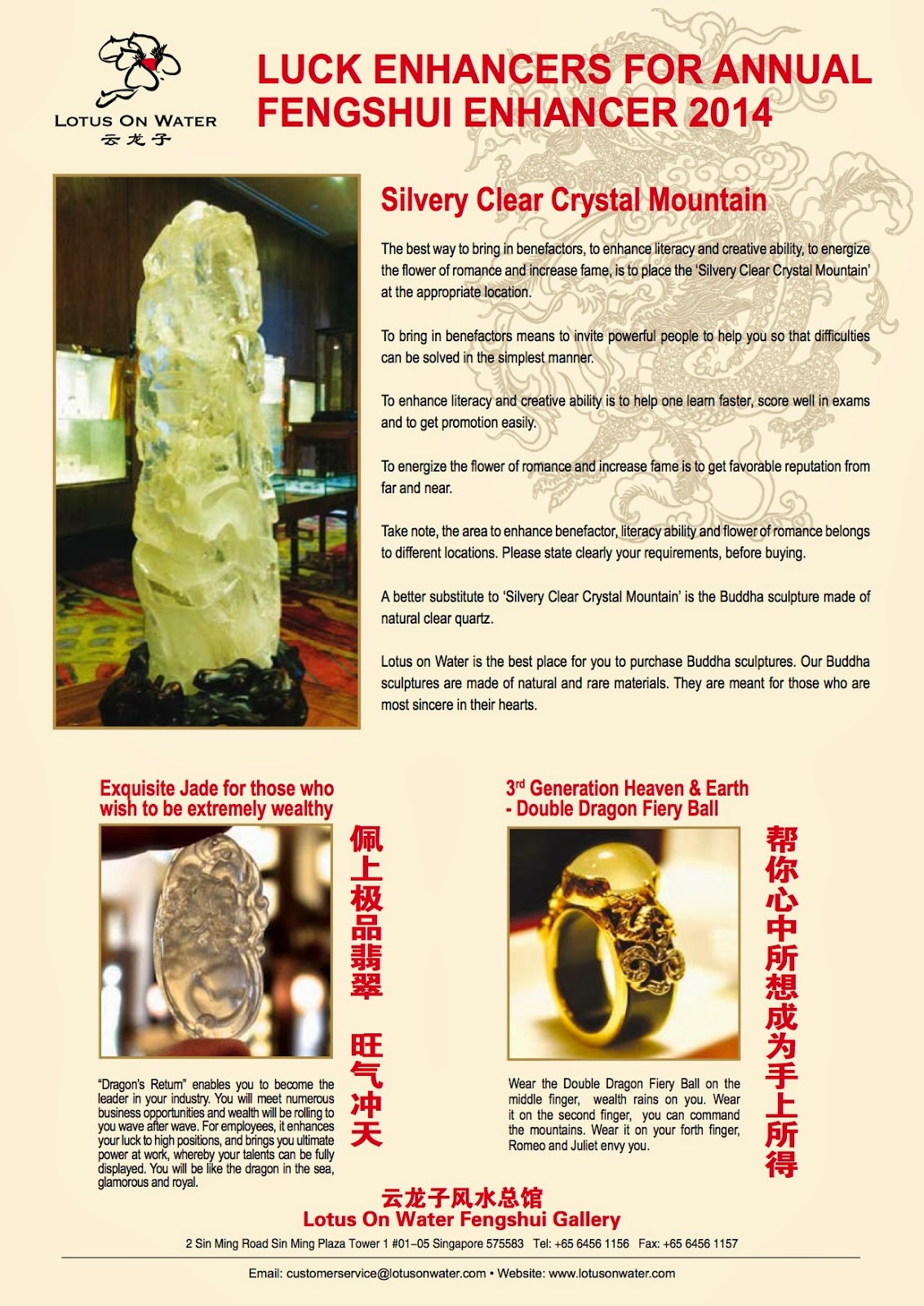 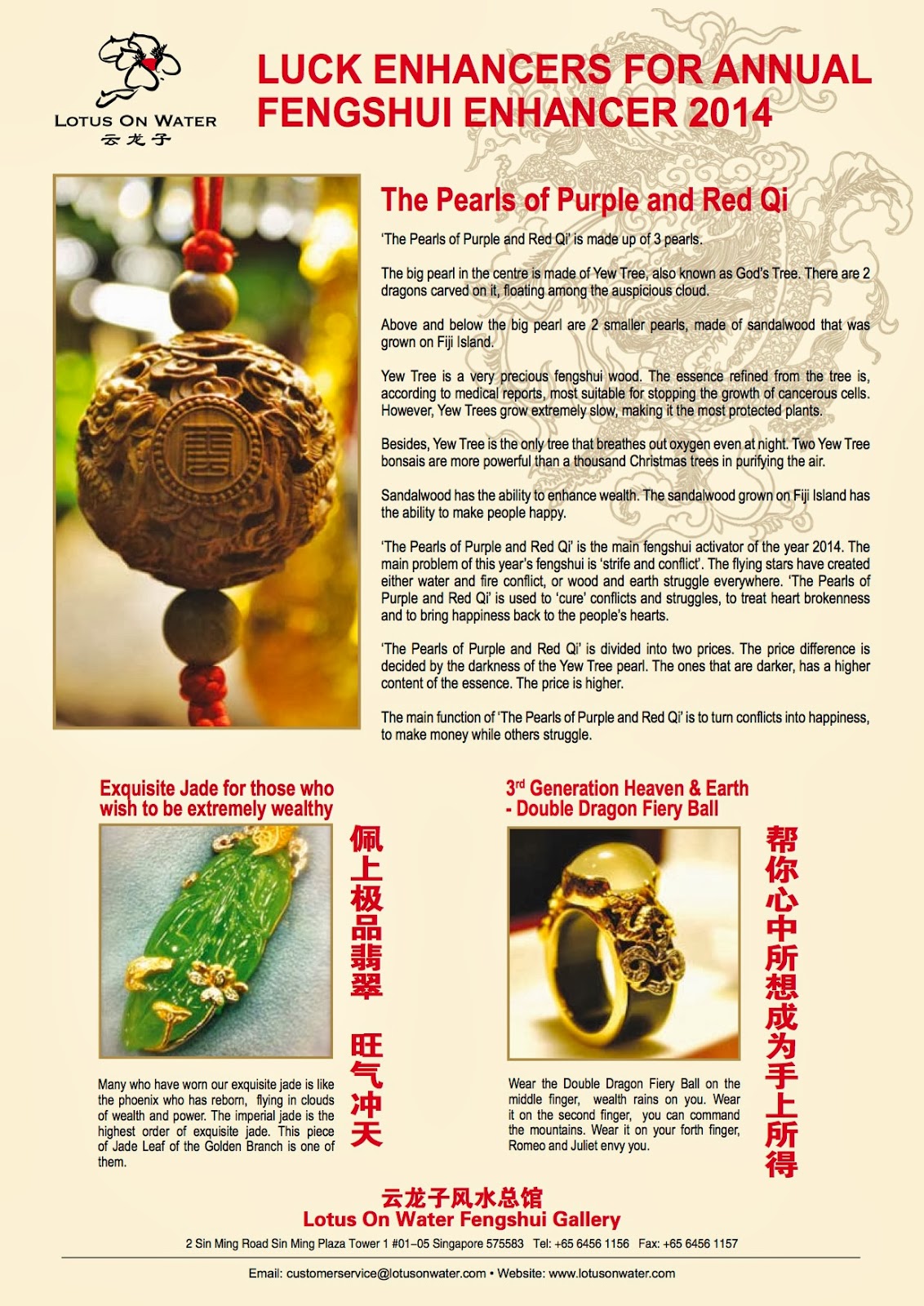 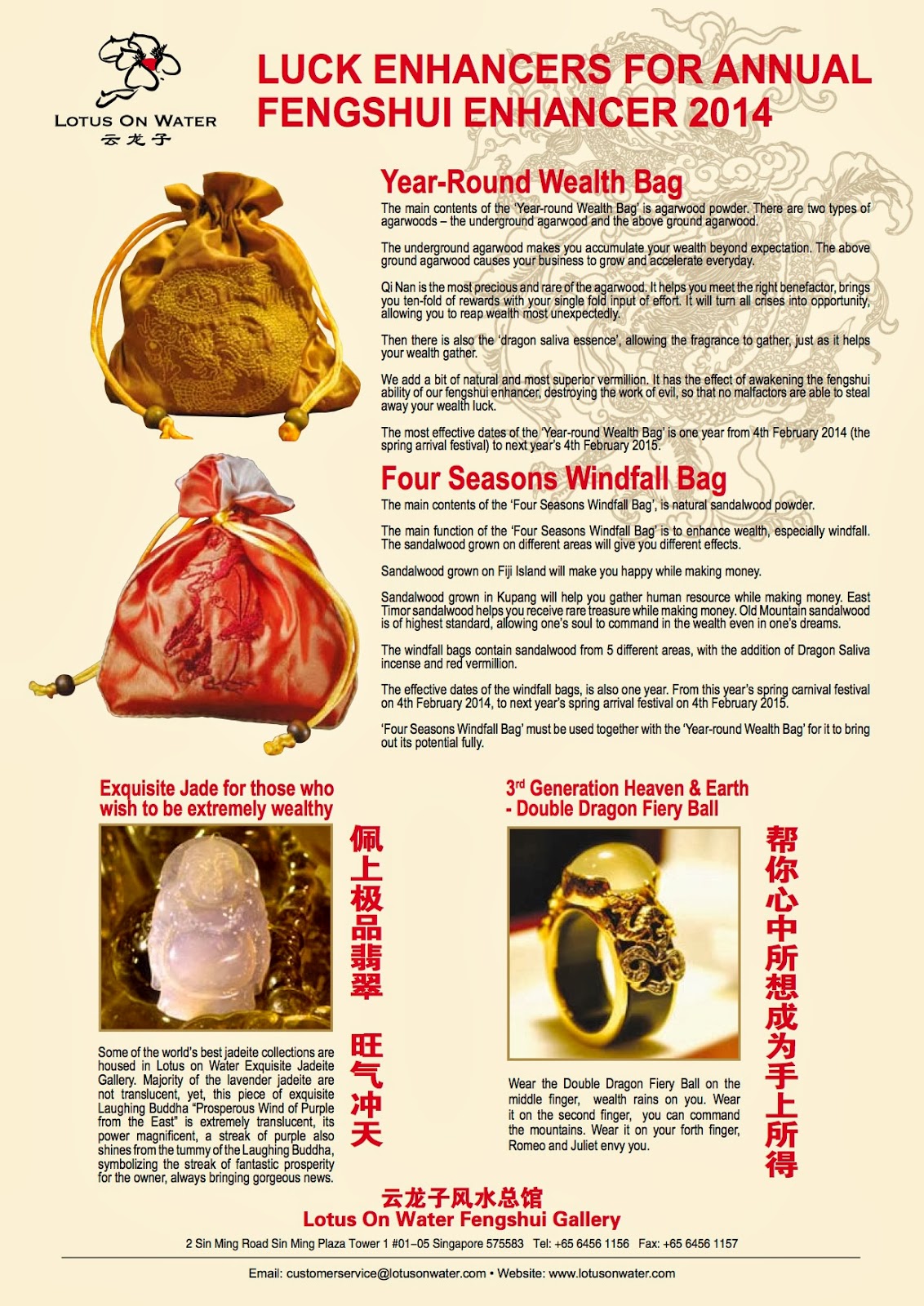 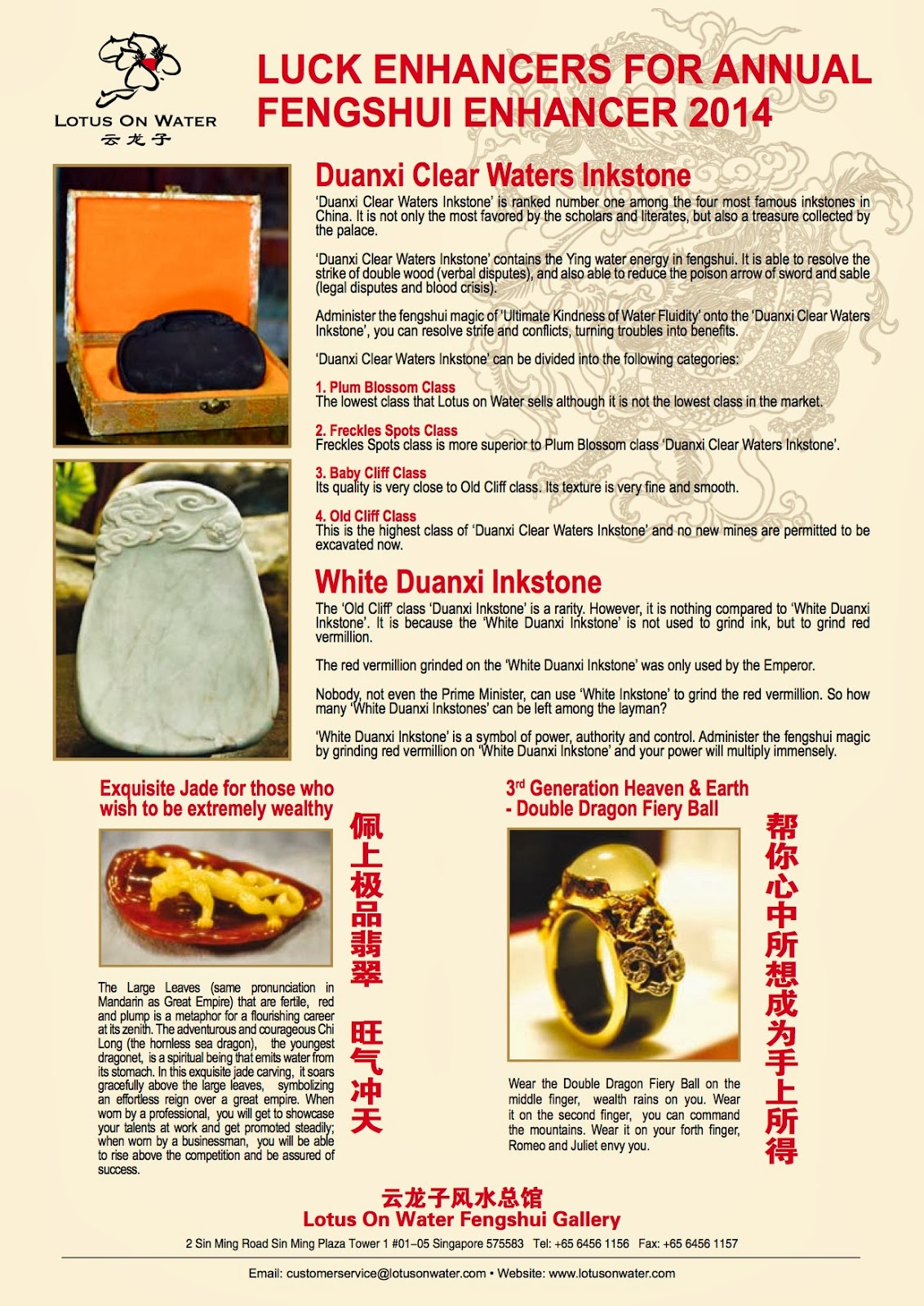 Posted by Kan Ying Loong at 7:14 PM No comments:

Email ThisBlogThis!Share to TwitterShare to FacebookShare to Pinterest
Labels: blessed clients, how to prosper, Kan

I Beg Your Pardon for So Stating the Obvious

Master Yun sometimes doesn’t state the obvious. First, to try to avoid being rude by implying the counterpart as having an inferior intelligence. Second, Master Yun thought it is obvious enough.

As a feng shui master, Master Yun has taken a personal oath to speak “only” the truth. That is to say, whatever he says must only be true and not false. Thank goodness he did not take an oath to always speak the truth. Meaning, he may choose to keep quiet and not speak the truth even if he knew it.


But to balance between tactlessly truthful and irresponsibly oblivious, he normally “shows” the obvious instead of “stating” the obvious.


But so it seems, for quite a number of people, having things staring right in front of them is still impossible for them to see. So I have to state a few obvious cases for him and I beg your pardon for my rudeness.


This PR company has done Master Yun favors in the past and recently, and Master Yun feels it is not right not to oblige her. And this PR company is in his short list of names which he has been impressed. So he agreed.


We received these few business owners in our “Lotus On Water Exquisite Jadeite Gallery”. They walked through the gallery and met Master Yun on the mezzanine floor.


Master Yun asked them for their purpose of visit, the favors he might be able to offer and the ones they wish to receive.


After much fumbling and mumbling, they say they come from China and might be able to co-operate with us since China is full of resources. In other words, they wish to sell us jade made in China.


He mumbled and fumbled – again – a few lines, which is close to nothing meaningful.


If he had truly been a specialist in jade, he should be able to see, a piece of raw jade of gigantic size and of enormous weight (850KG) standing proudly, next to the path he walked on.


This piece of raw jade is the biggest raw jade displayed in Singapore and it is recorded in the Singapore Book of Records – not only so, one cannot find such a big raw jade in other big Chinese city like Beijing, Shanghai and Hong Kong.

Many have “claimed” that they are our jade suppliers. In order to show the obvious, Master Yun placed an obviously big piece of raw jade in my gallery.

It is just like saying if you claimed to be the tailor who made my garments then you must have in your home or store, a big piece of cloth that was used to make my garments.


If that piece of cloth is not in your home or store, but in mine, then you cannot be the one tailoring my garments.

The big piece of jade is the obvious that Master Yun is showing instead of stating. However, the truth displayed in elegance seem to be a truth ungraspable to the stubborn and shameless.


Till this day, Master Yun still have people claiming blatantly to be our jade suppliers because they are from China or Myanmar.

With Singapore, a population of only 5 million, how many people have shook the hand of Mr Lee Kwan Yew, a truly national treasure although we have lived in the same country for decades?

One had even told Master Yun that his maid from Myanmar could bring in jade from her country. If that is so, why should she be your maid?

Some people claim that feng shui is only about choosing a house or shop with the right direction and comfortable environment.

They even claimed that the feng shui items you place within the premise, especially quality, do not matter.

To “show” the truth instead of “stating” it, Lotus on Water only occupies four units of shops instead of the full eight units in the same row. If only the direction counts for feng shui effect, then the whole row of shops should be as vibrant as us. But the truth shows that it is not the case.

In fact, Lotus on Water did not collect the four units all at one go. We collected them one by one over the years. Most of the time, they are shops abandoned by previous owners who cannot make it. We took over & rectified them with the feng shui items we sell.

The half of the street of Lotus on Water is a stately testimony that the type of feng shui items you place within a premise does matter.

Come, stand in front of my galleries of Lotus on Water and watch. It is pretty glaring and obvious.

Master Yun has a cousin who asked him to choose a good feng shui home for him. After Master Yun did the feng shui for his house, this cousin in order to help his friend not to “waste” money coming to our galleries to buy feng shui items, helped his friend to choose a house that has exactly the same direction as his.

A couple of years later, he came to ask Master Yun why his friend isn’t doing well. To prevent being rude by stating the obvious, Master Yun pretended that he did not hear and walked away.

Of course the quality of the feng shui items, the size, the shape, the carving, the owner who sells you, the red vermillion used for blessing, the energy of the person who did the blessing – they all matter.


Is it not obvious enough?

Most people know that Master Yun learned feng shui from his grandfather. After he passed away, Master Yun took over. Master Yun did a revolution. He refused to use any cheap substitutes. Clients who prefer cheap substitutes and cheap outcome may see other masters.
For me and our clients, Master Yun’s conviction that is based on authentic philosophy and proven history, must be followed.

Master Yun’s aunt came to work for Master Yun and earned her jade pendant and the Heaven and Earth ring. After she wore them, she has striken at least twice, jackpots in the casino.

I suppose some people still prefer nostalgia to logical results. Master Yun’s aunt is one of them.

One day he asked her: “When grandpa was alive, how much money did you win with his good advice?” It was a few thousands dollars each time. He then asked her: “Then how about me? How much money had you won because you wore the rings I sold?” It was two digits more. Master Yun is not implying that his feng shui skill is more superior to his grandfather’s. However, Master Yun is definitely much more stringent than his grandfather when it comes to the remedies of personal luck and feng shui. And the results are miles apart.


It is Master Yun’s principle of “nothing except the best” that set him apart from the rest.

I sometimes think that God has done a great favor to those who are supposedly close to Master Yun, to put him so near to them. However, to balance out the favoritism, God has blurred their eyes so much that the obvious is not visible to them.
Posted by Kan Ying Loong at 1:56 PM No comments:

Email ThisBlogThis!Share to TwitterShare to FacebookShare to Pinterest
Labels: how to prosper, Kan, the lotus story

－－云龙子大师
Posted by Kan Ying Loong at 12:07 AM No comments: