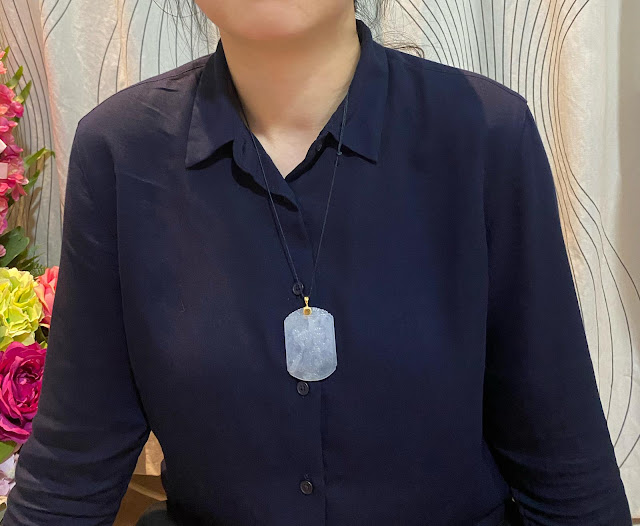 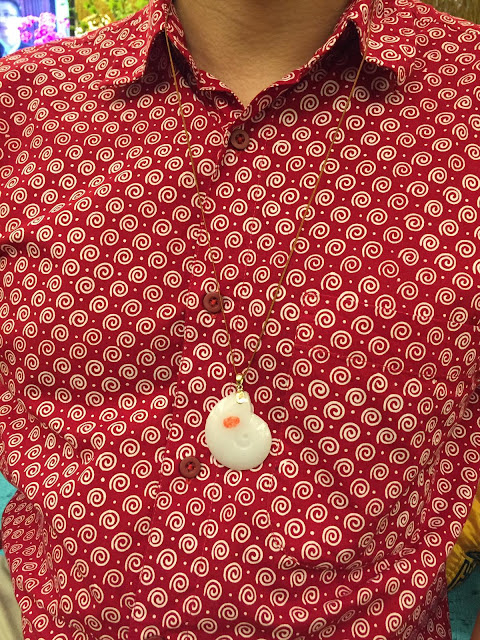 You can be forgiven if you thought Guan Yu was just a fictitious character from the epic Ming Dynasty novel, "Romance of the Three Kingdoms (ROTK)". This great work was later adapted in recent times into drama serials and many gamers would have also played Koei's turn-based ROTK strategy game and Playstation's Dynasty Warriors, which belongs to the hack and slash genre.
The immense popularity of Guan Yu, as compared to other leading characters, was probably attributed to his charismatic style of leadership! A quick search of Guan Yu's image on Google and you will call up a dignified gentleman in green flowing robes, armed with an impressive weapon known as the Green Dragon Crescent Blade! This legendary blade was said to weigh between 18-45 kg and Guan Yu reportedly was able to wield it agilely with just one hand!
In the Chinese-speaking world, very few historical figures are regarded with reverential respect as Guan Yu, who counts Guan Laoye (Grandpa Guan), Guan Gong (Duke Guan), and Guan Di (Emperor Guan), among his litany of officially bestowed titles.
According to Chinese historians, Guan Yu's overarching influence may have exceeded even that of Confucius himself! In China's three major belief systems - Confucianism, Buddhism and Taoism - Confucius has been deified in only one. Guan Gong, on the other hand, is admired by proponents of all three: To Confucians, he's a "sage", to Taoists, he's "Holy Ruler Deity Guan" and to Buddhists, he's the "Sangharama Bodhisattva".
Apart from being solely a cultural and philosophical icon, Guan Gong also became a kind of patron saint or "protector god" for everyone from blacksmiths and opera performers to triads and police officers. Many merchants started worshipping Guan Gong and he is one of China's four main wealth gods!
What explains Guan Gong's overwhelming charisma, galvanising support and adulation from cops and criminals, emperors and commoners, Taoists and Buddhists? The answer is Guan Gong's unconditional and overriding sense of zhongyi!
A portmanteau of the Chinese words for "loyalty", zhong and "righteousness", yi, Guan Gong's steadfast adherence to the principle of zhongyi proved pivotal to his astounding rise to greatness! China's emperors, who valued loyalty in their subjects, saw Guan Gong's obeisance and respect for his superiors as a value worth exulting. To the common folk, it was Guan Gong's yi that made him a panjandrum worth believing in!
And Valerie Low is one such believer! She is a rookie insurance agent who stumbled upon financial planning during this pandemic year. While many other newbies struggled for survival in her industry, (notorious for high attrition rates), Valerie thrived and did somewhat better than her peers. However, she wasn't settling for mediocrity and was seeking a real breakthrough in her career! Having done her homework and inspired by the success stories of other blessed Lotus clients, Valerie took a leap of faith and wore her Auspicious Metal Guan Gong jade pendant in August this year!
The events that ensued shortly thereafter were a series of amazing synchronicities! Valerie smoothly closed more deals and the commissions she received in August itself easily covered more than 50% of the investment she made in her Guan Gong jade pendant!
Besides that, Valerie was also recognised for her efforts and ranked Top 5 in her insurance company, for the month of August this year! She credits her meteoric rise and achievements to Guan Gong's zhongyi!
If you are in a sales profession like Valerie and you seek to transform your results, do consider getting the venerable Auspicious Guan Gong jade pendant, as your faithful ally to empower you in smashing away all obstacles in your path and emerge victorious!!! 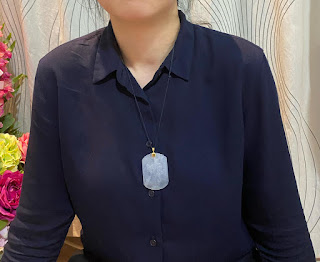 Posted by mrtmaths at 3:06 AM No comments: 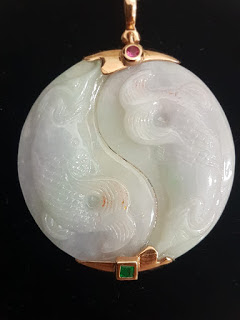 Posted by shaunchoh at 11:52 PM No comments:

From Zero to Hero

You will know Mr Zhang Guangsheng if you watched Mr Kan’s live stream on Facebook.

Mr and Mrs Zhang got married in December 2017 and started their sweet marriage in a rental apartment. As the saying goes, “everything is difficult at the beginning”, and their relationship was tested by everyday finances. Pressure at work and strained finances took a toll on their relationship, leading to numerous squabbles.

Mrs Zhang is a traditional Chinese who adores jadeite and believes in its energy. Mr Zhang was convinced by the energy and power of jadeite after his wife’s explanation. One day in May 2017, Mrs Zhang searched for “jadeite” on Facebook and found Lotus on Water. She left a message on Lotus’ page, and Cola called her up to arrange for a meeting the very next day. The couple made their way to Lotus on Water, but they agreed that they would leave if the jadeites required them to fork out more than $1000. At the point in time, they only had $1000 in the joint account.

Mr Kan and Cola were extremely helpful. After understanding that Mr Zhang was looking at improving his career, whilst Mrs Zhang was hoping for happier family relations and better career luck, Mr Kan and Cola showed them six jadeite pendants. Mrs Zhang took a look and was stunned at the price tag of $10K for a single jadeite. So after some small talk, they made their move without getting anything.

However, one month later, Mr Zhang contacted Cola and decided to get a Guan Gong jadeite pendant for himself and a Laughing Buddha jadeite pendant for his wife. As he was tight on cash, he paid for them with his credit card. Why did he make this decision? It is because he felt that things can’t get any worse when he is already at the doldrums, so he decided to put his faith in Lotus on Water.

What followed was nothing short of a miracle. Within three months of wearing his Lotus collection, Mr Zhang was promoted albeit without increment. Another three months later, he was headhunted by a company and breezed through the interview. In his new job, he was given a 30% increment. After two months, he was again offered a position by another company, which gave him 20% increment. In short, within six months of wearing his Guan Gong pendant, Mr Zhang received increments totalling 50%. The Lotus jadeite brought him from zero to hero!

Posted by shaunchoh at 7:07 PM No comments: 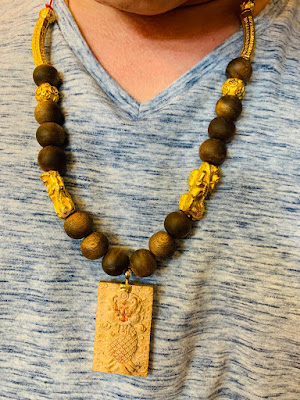 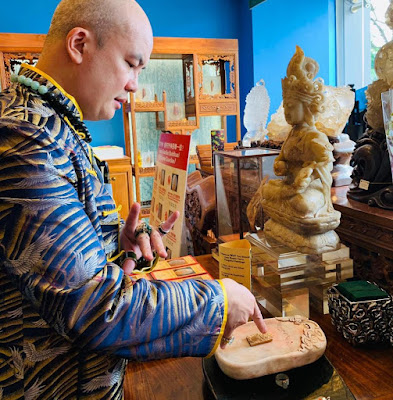 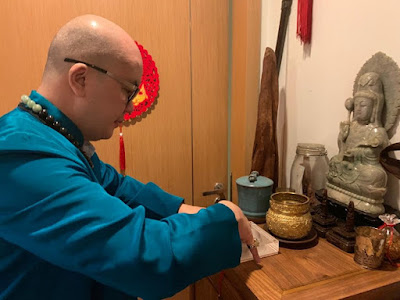 Posted by shaunchoh at 5:50 PM No comments:

[On 3rd December 2020, in conjunction with Master Yun being the first painter and Singaporean to exhibit fengshui paintings on the Great Wall of China, Master Yun embarked on the mega project of painting a calligraphy piece of 10m by 2m. The artwork comprises of many layers, and took 3 days to complete.]

Day 1:: First Layer: 《一画开天地，天地人三才》
“Opening the Heaven and Earth with One stroke, the Trinity of Heaven, Man and Earth”

第一层叫做
The first layer is called

《一画开天地，天地人三才》
“Opening the Heaven and Earth with One stroke, the Trinity of Heaven, Man and Earth”

由彩色竖划开荧光色(阳与阴）
The color lines breaks up the pools of fluorescent Paint. (Yang and Ying)

三色代表天地人
The three colors represent the realms of Heaven Earth and Man.

胭脂红加朱砂红代表人
The rouge and vermillion mixture of red represent the realm of Human.

指的不是数字
It is not numerical

一是太极，生两仪（阴阳），二生三（天地人），然后生万物。  The Oneness is the entity of Taiji, which gave birth to twoness (Ying and Yang) and give birth to the trinity ( Heaven Earth and Human), thus created everything. 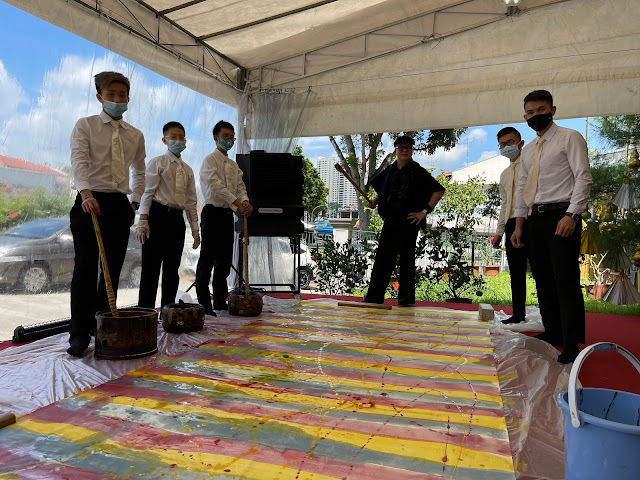 《飞龙在天，》第二层
The second layer of “Flying Dragon Up at Heaven”

《易经》是六经之首
“I-Ching” is the king of the six classics.

作者有三人：
It has three authors

没有“十翼”的教育，如何助龙飞上天呢？
With the education of “Ten Wings” the dragon is assisted to soar up to heaven. 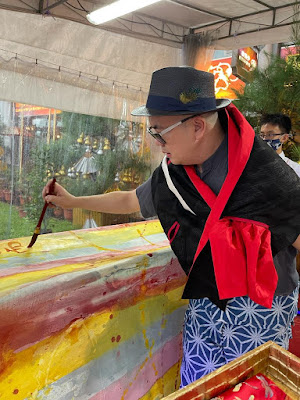 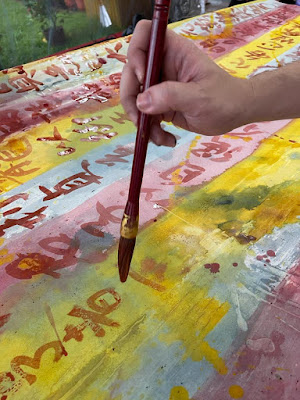 Day 3 :: Third Layer:《群龙有道》
The third layer of “Flying Dragon Up the Heaven”.

《群龙有道》
The third layer of “Flying Dragon Up the Heaven”.

“Multitude of Dragons on the path of Tao”

却又言吉。
The Classic reads: “multitude of dragons without head”

草字的“龙”，以一个点（龙头）及一条弯曲的线（龙身）构成。
How to use art to express the scenario?

我把点画成圆圈，一条龙接一条龙。此龙头接上一条龙尾。
The cursive style of the character “dragon “ consists a dot (dragon head) and a curving line (dragon body).

画了三圈的群龙。
I expand the dot to a circle, and joined one dragon with another dragon. One dragon head biting the tail of the other dragon.

最后一条龙尾接第一个龙头。
After three rounds of dragons. The last dragon tail is joined with the first dragon head.

所以，看不出头在哪里。
Thus, you can’t tell who is the head (or leader) 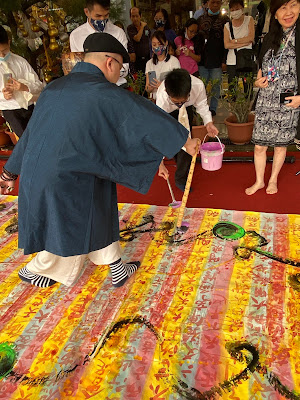 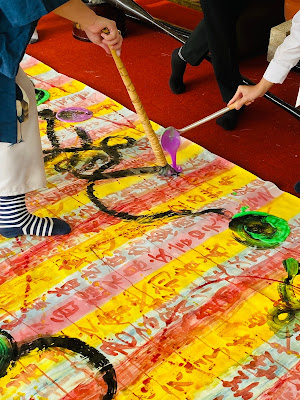 《飞龙在天》第四层
The forth layer of “Flying Dragon Up the Heaven”.

“飞龙在天”来自易经乾卦第五爻
The phrase “Flying Dragon Up the Heavens” come from I-Ching, the Qian Hexagram, fifth Layer

以此祝福中国，新加坡及全世界的人，战胜病毒与困难，并...
So I use this phrase to wish China, Singapore and the rest of the world, to conquer our common enemies of Illness and crisis, and be....

“飞龙在天”
“Flying Dragon Up the Heaven” 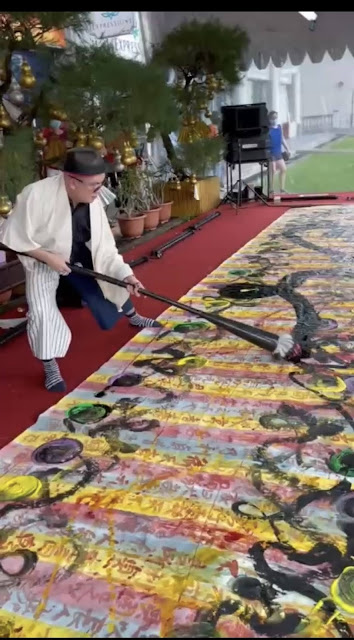 这一层，我连白银也不用，
For this layer I don’t even use silver.

单用纯黄金。
But only pure gold flakes.

铜鈸一开，舞动拂尘拨金，
When the cymbals are opened, I waved my Buddha duster to whip the gold flakes to the air.

“飞龙在天”四个字如一条翻腾的巨龙。
The Calligraphy of that phrase itself looks like a flying and swirling dragon.

假想画纸是一池映天之水，宛如飞腾的龙，将身上金鳞泼洒天地。
If you imagine the painting to be a pool of water, it is as though the flying dragon is shedding gold scales onto Heaven and earth. 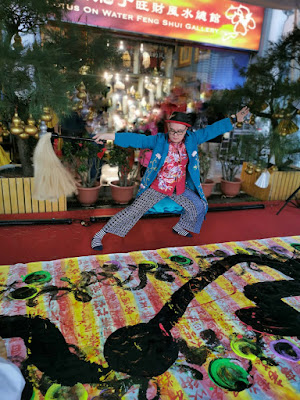 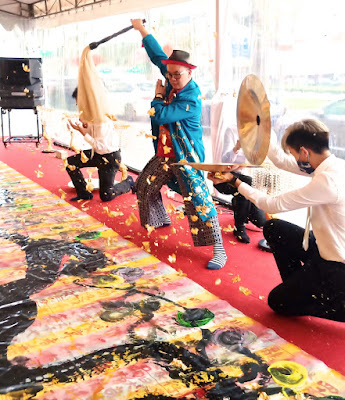 Day 3:: Sixth Layer: 《朱砂铃印》
"Sealed with Red Vermilion"
大功告成
Finale!
刻了名号的大印章己经寄往北京了。
The big seal carved with my name and title has been sent to Beijing.

只好用手掌印代替。
I have to use my palm instead.

有人还说是“五指山”呢！
Some people say I am using the magical seal of “Five Mountains “. The one that Buddha has used to contain the naughty monkey king. 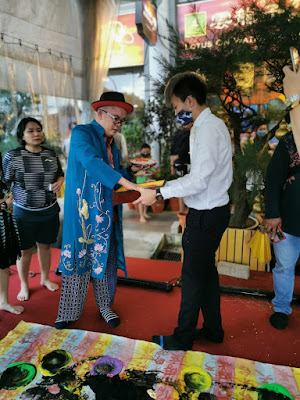 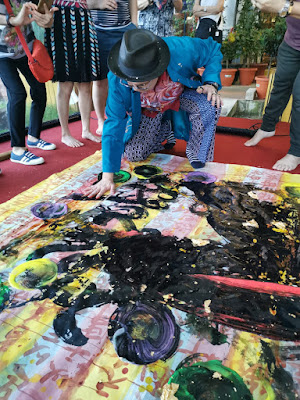 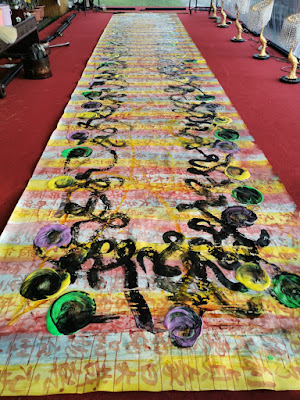 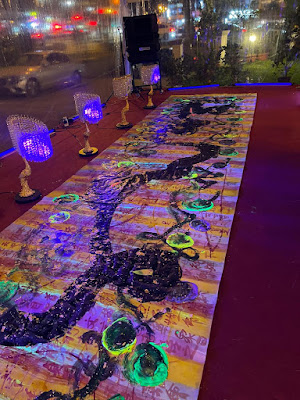 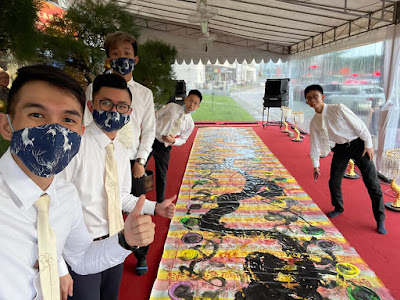